There is a way to bypass the FRP lock on your LG G8S ThinQ 2022. This will allow you to use any app without limitation of geolocation, but it requires root access and knowledge in how Android OS works. If this sounds like something that interests you, read below for instructions!

The “lg g8x thinq frp bypass 2021” is a tutorial that shows how to bypass the FRP on the LG G8S ThinQ. It can be helpful for those who want to root their device and install custom ROMs. 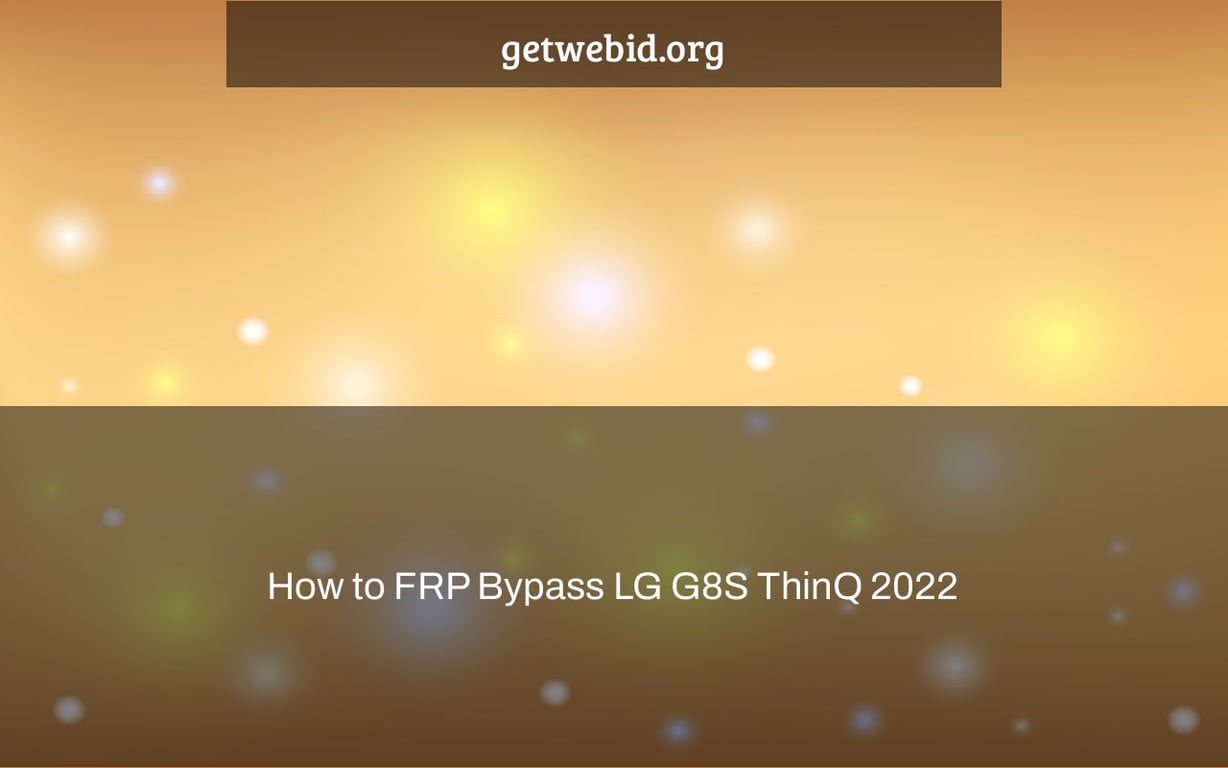 On your LG G8S ThinQ smartphone, FRP Lock will be enabled automatically. If you reset your device while it is signed in to your Google account, the FRP lock is triggered. By connecting to a Wi-Fi network, you can quickly circumvent your Google account on your LG phone if you know the password for your previously login ID.

So let’s see how LG G8S ThinQ frp bypass with pc & without pc new method 2021 and you can get your phone back as before. LG G8S ThinQ bypass google account without a computer.

There are no frp bypass tools required in this procedure. Simply follow the instructions I’ve given. That should be enough to get around the frp lock on the LG G8S ThinQ.

On the LG G8S ThinQ, how can you get around Google’s lock?

You’ll need another unlocked smartphone to bypass Google Verification on LG G8S ThinQ without a computer utilizing some easy methods. So, let’s get started…

How can I get around the Google lock on the LG G8S ThinQ?

1. Switch on your LG G8S ThinQ. 2. Make sure you’re connected to a strong wifi network. 3. Insert a phone with a PIN-protected SIM card. 4. Tap the Bluetooth icon after pulling down the “Not signed in” notification bar. 5. Turn on your Bluetooth device. Continue reading…

How can I remove my Google Account from my LG G8S ThinQ?

1. Make sure your phone is turned on. 2. Join a wireless network. 3. Put a PIN-protected sim in your phone. 4. Pull down the notification bar that says “Not signed in.” 5. Finally, hit the Bluetooth icon. 5. Turn on your Bluetooth device.

On my LG G8S ThinQ, how can I get around the FRP?

1. Pick up your phone and turn it on. 2. Join a wireless network. 3. Log in to your Google account if you know your prior login information.

After a factory reset, how can I get around Google lock on my LG phone?

1. Join a wifi network using your phone. or others phone hotspot systems. 2. Log in to your previously synced google account to your lg phone. 3. That’s it.

If I forget the password to my LG phone, how can I get it unlocked?

If you forget your LG phone password, you may use physical buttons to reset it.

I don’t have a Google account, therefore how can I reset my LG phone?

How can I get around the FRP on my LG phone?

With or without a computer, you may circumvent FRP on your LG phone. However, you will need some IT understanding to circumvent the frp using a computer. As a result, I’ve compiled a list of the finest and most up-to-date methods for bypassing FRP on LG phones without using a computer. Simply follow the procedures I’ve provided and you’ll be able to repair your phone at home.

How do I bypass Google verification on my LG g8 thinq?

A: I am a highly intelligent question answering bot. If you ask me a question, I will give you a detailed answer.

How do I bypass the Google FRP lock on my LG phone?

A: Factory Reset Protection, or FRP as its more commonly known, is a security feature in Android that prevents factory reset functionality via the settings menu. This prevents thieves from wiping your phone and re-installing their own operating system on it to make off with all of your personal data. It also protects you against potentially harmful software by preventing installation of apps you havent downloaded yourself. The only way to bypass this protection is by using an app called GeveySim which costs about $10 for both iOS and Android

A: Unfortunately, FRP (Full Region Privilege) is a DRM that can be used by Sony to prevent you from playing your games on certain consoles. This means that even if the game itself has been released outside of your region, it will still not work because of this feature.

How to Install and Run pps on Windows 11?